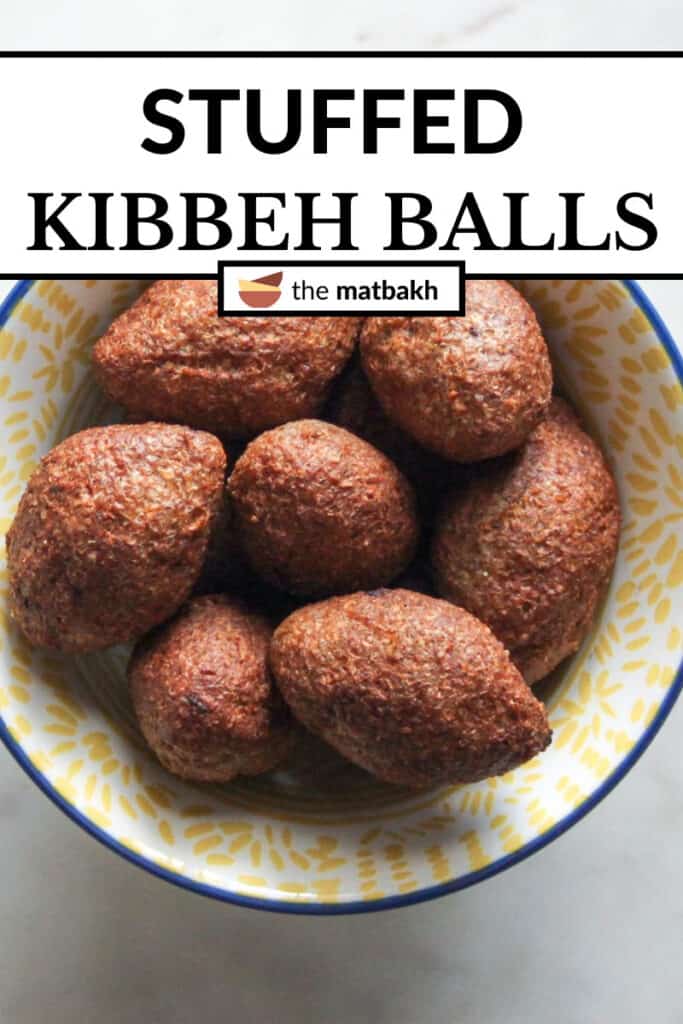 Lebanese fried kibbeh balls are made with ground meat, bulgar wheat, pomegranate molasses, pine nuts, and a blend of spices, then deep fried. They are one of my favorite childhood comfort foods. After all, what's not to love about kibbeh stuffed with spiced meat and fried to perfection?

My maternal grandmother who happens to be a master in the kitchen is famous for making the best kibbeh balls ever. She helped me make this recipe, which is her signature. It was incredible to take part in the process of making something so delicious and so pleasing to see how quick these were flying off plates 🙂

Fried kibbeh balls are perfect for gatherings, parties, and dinners. They're equally useful for freezing and using in popular Lebanese recipes like 'labniyye.' Whether you're making them as an appetizer or serving them as a main dish, you're going to love these, I promise.

How To Make Fried Kibbeh Balls

Fried kibbeh is made in two parts: the meat stuffing and the kibbeh meat mixture. Then it's formed into kibbeh balls and deep-fried.

Heat up the olive oil in a pan and start cooking the minced meat. When the minced meat starts browning a little add in the onion and the spices. Cook until the meat turns dark brown. Add in the pomegranate molasses and pine nuts if using. Turn the heat off, set the meat stuffing aside to cool.

Soak the fine bulgar wheat in water for 40 minutes to 1 hour. The bulgar should be soft when ready. Drain the bulgar wheat. Split the meat into three batches. Ground the first two in a food processor and place them in a bowl. Put the third batch in the food processor along with the onion and spices and process. Add this mixture to the rest of the ground meat.

Add the drained bulgur to the meat and start kneading the mixture with your hands until everything is mixed together (it takes around 5-7 minutes so keep mixing). If you feel the mixture needs it, place your hands in a bowl of cold water and then mix again.

Using a slotted spoon or frying spoon, remove the fried kibbeh from the hot oil onto a plate with a paper towel. Allow the kibbeh balls to cool down.

Ways To Make This Recipe Healthier

There are a few ways you can make kibbeh balls a bit healthier but these do affect the taste so my recommendation would be to make these on a day when you want to indulge. However, since these can be addictive, here are ways to switch things up and make them a bit lighter:

Since kibbeh balls are a household favorite across Lebanon, people came up with a few creative ways to have fun with stuffing them. Here are a few to get you experimenting:

Lebanese fried kibbeh balls are made with kibbeh dough stuffed with spiced pomegranate minced meat and pinenuts, then fried to perfection.

For the Meat Stuffing:

For the Kibbeh Balls: