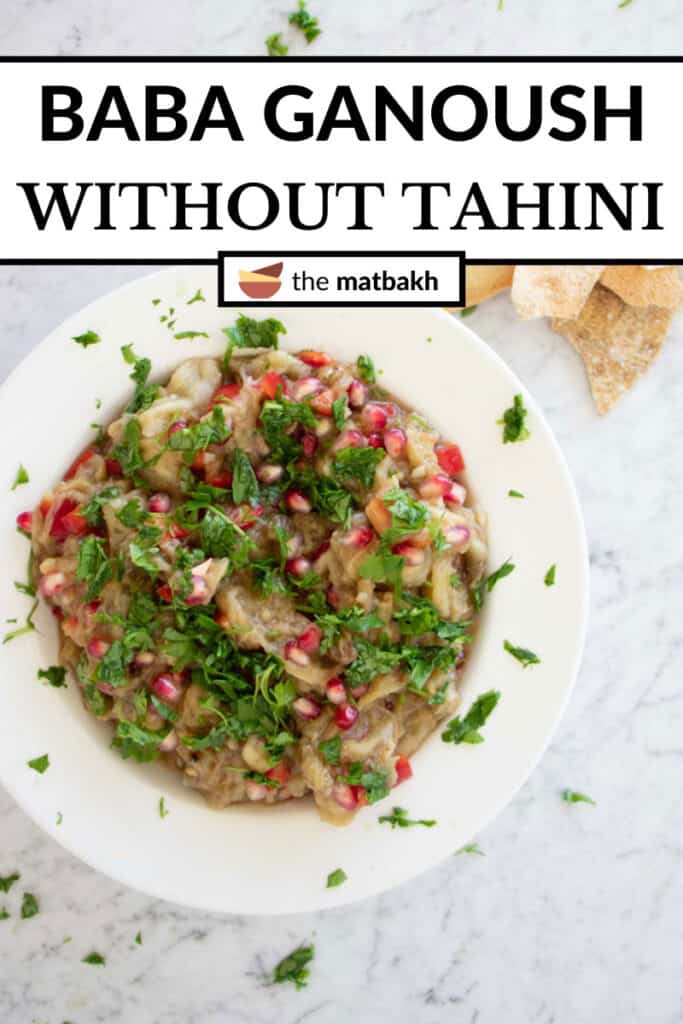 Baba ganoush without tahini tastes entirely different, especially when paired with pomegranate molasses, chopped bell peppers, and pomegranate seeds. In my humble opinion, this is the best way to make homemade baba ganoush using an oven and no tahini. The best thing about this baba ghanoush recipe is how delicious it is!

For specific instructions and quantities, refer to the post's recipe card at the bottom.

How to Make Baba Ganoush Without Tahini

Chop the bell peppers and parsley. Deseed the pomegranate. Squeeze the lemon. Mash the garlic.

There are many regional variations for this creamy eggplant dip. To make this the Lebanese way, add tahini (about 3 tablespoon for this recipe) and omit the bell peppers, pomegranate seeds, and pomegranate syrup. Use store-bought tahini, or make your own tahini.

Store baba ganoush in an airtight container in the fridge for up to 4 days.

What is the difference between baba ganoush and moutabal?

Baba ganoush and moutabal are the same things. Both are made of roasted eggplant, tahini, mashed garlic, and lemon juice. Some parts of the world will distinguish moutabal and baba ganoush apart from one another by omitting tahini.

How do you eat baba ganoush?

Baba ghanouj is traditionally eaten with pita bread. You can also eat it with pita chips or toasted bread.

Baba ganouj is the same thing as baba ganoush. The English spelling of an Arabic word may vary, especially for sounds that aren't in the English language.

This baba ganoush without tahini is made with roasted eggplant, pomegranate seeds, lemon juice, mashed garlic, and pomegranate molasses.