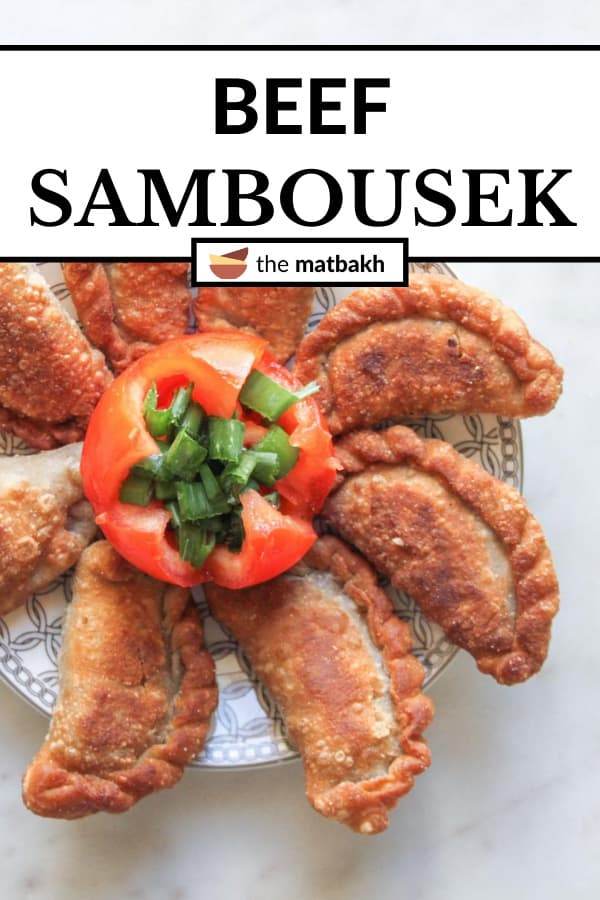 Beef sambousek, also known as sambousek lahme, has always been one of my favorite appetizers. Filled with a spiced meat mixture that's wrapped in delicious dough and fried to perfection, what's not to love?

These meat pastries are a dish that you'll always see on the table at every major occasion in Lebanon. From family get-togethers to wedding buffets, they make an appearance everywhere. They also can make an incredibly quick meal to put on the table because they freeze so well.

Sambousek has a few parts to it: make the homemade dough, cook the minced meat stuffing, fold, and fry the meat sambousek pastries.

Optional: Use store-bought pizza dough instead.

If making homemade dough, place the dry ingredients (flour, active dry yeast, salt, and sugar) in a bowl. Create a well in the middle. Crack the egg and pour all the liquid ingredients (lukewarm water, milk, and vegetable oil) into the well.

Scrape the sides into the liquid ingredients and combine everything together. Then start kneading the dough. Remove it from the bowl and place it on a floured countertop. Continue kneading by hand for up to 10 minutes.

Place the dough back in the bowl and cover so the dough can rise while preparing the minced meat stuffing. The dough needs an hour to rise.

Heat up a little bit of oil in a frying pan and add in the raw meat mix. When the meat starts to turn brown add the chopped onions and spices. If you're using pine nuts, add them in. When the meat is cooked through, remove the mixture from the heat and drizzle it with a little bit of pomegranate molasses (if using).

First, roll out the dough you've got on a floured surface. Use a cookie cutter or cup to make circles (they should be around the size of your hand palm).

Lay each round on your hand before you fill it with a teaspoon of meat.

Pro Tip: The biggest tip in making meat pastries is not to over-fill the dough (which will cause the sambousek pieces to break when being fried). To avoid that, measure a teaspoon of meat filling for every dough round.

While it's still in your hand, close the dough up around the filling into a half crescent shape. Make little twists to close up the edges. Set the sambousek pastries aside until all of them are folded.

How to Fry Sambousek in Oil

Once all sambousek pastries have been folded, heat up the frying oil. Add the sambousek in batches so as not to overfill. Once the sambousek turns golden brown, remove them from the frying pan and place them on a plate lined with a paper towel. Once the excess oil is gone, transfer the pieces to a serving dish.

Freeze sambousek pastries (that are not fried) in a freezer-friendly bag for up to 4 months. Beef sambousek is best served fresh.

Is sambousek the same as samosa?

Though both are often filled with savory ingredients, sambousek is always filled with either meat or cheese while samosas are stuffed with potatoes, peas, vegetables and cheese. The dough used in their making can also be different with the samosa dough being a little thinner and crispier.

Sambousek can be frozen. Don't fry the sambousek prior to adding it to the freezer. When ready to eat the sambousek, allow it to thaw then fry.

Beef sambousek is an incredible freezer-friendly appetizer. Homemade dough is stuffed with minced meat, then fried until golden.