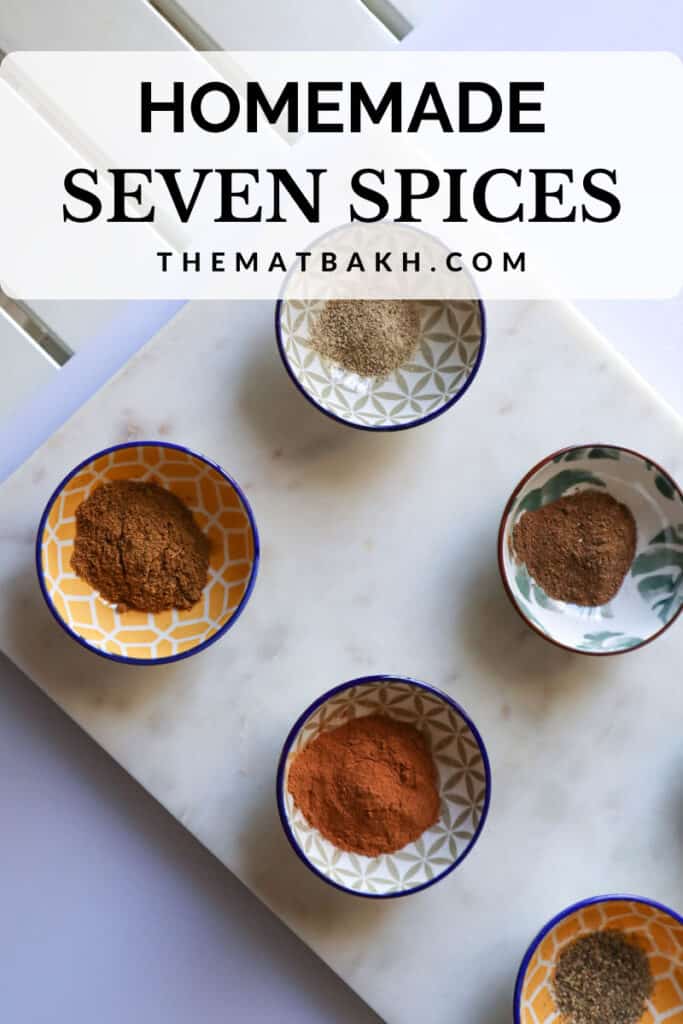 Lebanese seven spice is a blend of seven ground spices: black pepper, white pepper, allspice, ground clove, nutmeg, cumin, and cinnamon. This ground spice is a staple in all of our kitchens in the Levant region. Aromatic, unique, and flavorful, a teaspoon of it is often enough to add a touch of magic to a wide array of traditional Lebanese dishes.

It's so easy to make! I know a lot of people who live abroad can't find the Lebanese seven spices blend in local grocery stores. With this recipe, you'll no longer need to look for ready-made packs. With a few basic herbs and easy-to-find spices, you'll be on your way to making your own jar. Also, this spice blend is used in a lot of Lebanese recipes.

This Lebanese spice blend is made up of the following ground spices:

How To Make Lebanese Seven Spices

Using a measuring spoon, measure out the ground spices.

Mix the ground spices together.

Using a funnel, pour the ground spice blend into a spice jar. Label the jar with the contents and date.

If using whole spices, grind them using a spice grinder prior to mixing. It's easier to make this spice blend with pre-ground spices.

Is baharat the same as 7 spice?

What is seven spice made of?

What can I substitute for 7 spice?

You can substitute a blend of ground cinnamon, nutmeg, cloves, allspice, and black pepper.

What spices are used in Lebanese food?

Can You Substitute Allspice For Seven Spice?

My teta says: Never do that. The Lebanese seven spices blend is way more diverse and flavorful than allspice by itself so unless you're in a pinch, try to avoid substituting seven-spice in a recipe that calls for using it.

The blend keeps for up to six months when stored well (in a cool and dry pantry). Do not refrigerate or freeze the spice mix because moisture affects the texture and flavor of the spices.

Seven spices is used in many Lebanese recipes from chicken shish tawook to stews and even baked kibbeh bil sanieh. I also often add a bit of olive oil to it and use it as a rub when baking fish or grilling meat. Sometimes I like to use it in homemade tomato sauces because of its incredible flavor.

My teta sprinkles a little in salad dressings and adds a teaspoon to every meat mince she ever makes. She uses it when making stuffed zucchini (kousa mahshi), soups, and tabbouleh. I also always taste this blend in the stuffing of her famous sambousek.

Case in point? This Lebanese spice blend is super versatile and can be added to any dish you're making. I recommend that you get adventurous and experiment with it. Adjust the taste as you go and balance out its flavors. You can always increase or decrease the amount of one of the seven spices that make up the blend to customize it to your own taste.