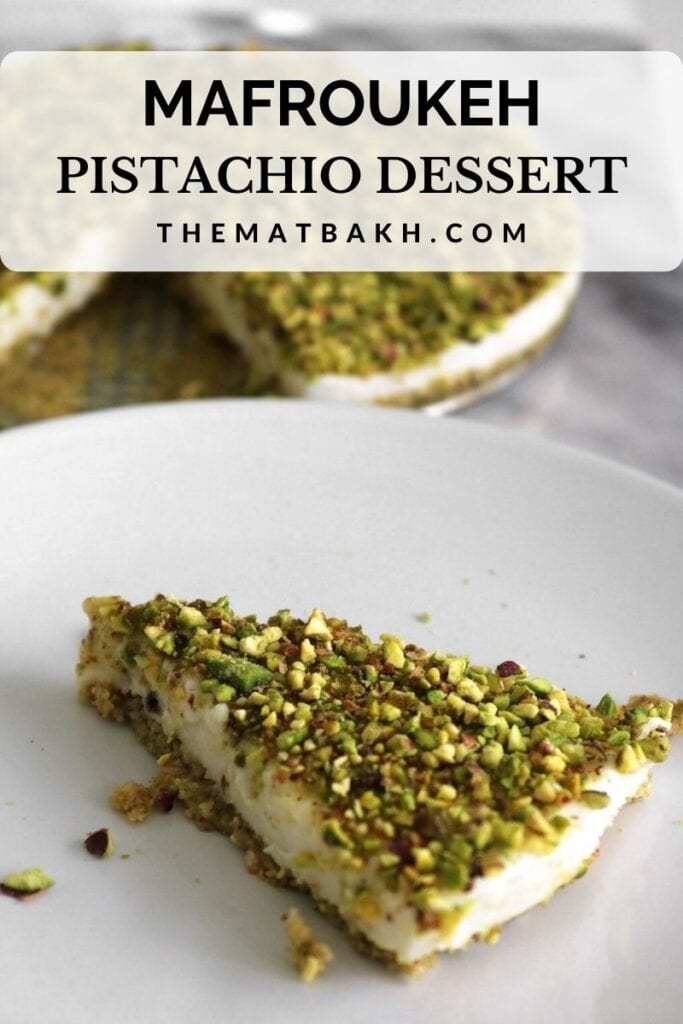 Mafroukeh is one of those simple, no-bake desserts that you can whip up when you’re in a hurry but still want to make something impressive. The combination of the thick, homemade cream with the unique texture of the semolina-pistachio base is to die for when it’s all topped off with orange blossom water-infused sugar syrup. And guess what? It's all done on the stove and takes about 20 minutes to put together.

Mafroukeh is so versatile, you can make it in a round pan, a square pan, or even in individual cups. It might be simple, but you'll definitely be adding it to your list of favorites.

Start by making the simple syrup: dissolve the sugar and water in a saucepan on the stove. Bring to a boil and add the lemon juice, stirring until it thickens, then add in the orange blossom water and set aside to cool.

Mix the flour, milk, and cornstarch in a medium-sized pot. Make sure they dissolve. On medium-high heat, start whisking the mixture until it starts bubbling. Keep whisking continuously until it starts to thicken.

Once it thickens, take it off the heat, and add the orange blossom water, mix and transfer to a bowl immediately. Cover with plastic wrap, making sure the plastic wrap touches the surface of the cream (so it doesn't form a film on the surface as it cools).

Make The Semolina Pistachio Base

Start by grinding the sugar and pistachios in your food processor and set them aside. Melt the ghee in a pan on the stove and fry the semolina in it until golden, then add the water and mix consistently until it thickens significantly.

Let it cool for a couple of minutes, then place the semolina mixture into the food processor with the pistachios and pulse until fully incorporated.

Press the semolina dough into a 9-inch springform pan, then top with your cooled ashta and garnish with chopped pistachios. Let it set in the fridge for a few hours. Pour some simple syrup on top as desired when ready to serve.

Made from a hard type of wheat called durum wheat, semolina is basically just a coarser flour. It’s usually used in pasta, bread, as well as baked goods, but it’s super well known for being used in semolina porridge. This is because it absorbs liquid really well. You'll usually find it at your local supermarket in the flour section.

What are some recipes that use semolina?

In Syria and the rest of the Middle East, Semolina is very commonly used in numerous desserts and baked goods like basbousa and mamouniyeh and is what gives them their distinct grainy texture. Additionally, it’s commonly served in savory dishes as couscous in the place of rice.

In The Mood For More?

Mafroukeh is a mouthwatering dessert made of layered pistachio semolina dough, homemade cream, and topped with an orange blossom sugar syrup.

For the simple syrup:

For the semolina dough: