This Lebanese baked kibbeh recipe is stuffed with spiced minced meat, onion, and pinenut mixture sandwiched in between two kibbeh layers and tray-baked to perfection. This baked stuffed kibbeh recipe is the three-layer version of baked kibbeh, or kibbeh bil sanieh. Served alongside some pita bread and cucumber yogurt sauce, or khyar bi laban.

If you are a kibbeh fiend, check out some of our other kibbeh recipes: kibbeh in yogurt, kibbeh nayeh (raw kibbeh), fried kibbeh balls, and potato kibbeh. Here are 22 of the best Lebanese recipes for more Lebanese cuisine!

Baked stuffed kibbeh is delicious Lebanese comfort food. This recipe is a big batch recipe, perfect for gatherings or for leftovers. I love that this recipe can be split between two baking dishes (bake one immediately and store the other in the freezer), so basically it's a second meal ready to go without any effort. This family recipe is brought to you by Aunt Maguy!

How To Make Stuffed Kibbeh

Make the kibbeh stuffing first, so it has time to cool. In a large nonstick pan on medium-high heat, fry the diced onions in oil (about 5 minutes). Once the onions soften, add the pinenuts and fry for about 2 minutes or until golden. Then add the ground meat to the onion mixture, breaking up the clumps with a wooden spoon.

Once the meat turns golden brown, add the seven spices, allspice, salt, pepper, and butter (for taste). Turn the stove off and add the pomegranate molasses. Mix and set aside to cool while preparing the kibbeh meat mixture.

Soften the bulgar wheat by rinsing it in water, draining the water, then letting sit for about 5 minutes.

Make the kibbeh dough mixture in 3 batches. Grind the ground meat, soaked bulgur wheat, and ice cubes together. Move the blended meat to a large bowl.

Add some of the kibbeh meat mixture back into the food processor along with the allspice, seven spices, cinnamon, dried mint, dried basil, salt, and pepper. Blend until combined.

Move the spiced kibbeh meat mixture back into a large mixing bowl with the other parts that are ground. Add some ice cubes.

In a separate bowl, add some water and ice cubes. Dip your hands in the cold water. Using your hands, knead the kibbeh meat mixture for about 2 to 3 minutes until all of the dough is combined.

Pro Tip: Dip your hands in ice water when the kibbeh dough sticks to them.

For the bottom layer: grab a large chunk of the meat mixture and flatten it in between the palms of your hands. Press the kibbeh meat mixture into the pan in a thin layer. Repeat. Press the sections together forming a flat layer.

For the middle layer: add the beef and pine nut mixture on top of the first layer.

Make one small hole in the middle of the kibbeh tray with your index finger. Cut vertically and horizontally all the way through the three layers intersecting this hole.

Continue making shallow cuts vertically and horizontally about ¾" (2 cm) thick until the edge of the pan. Spread some oil on top.

Kibbeh is similar to meatballs in texture because of the blended bulgar wheat and ground meat. However, the flavor is different because of the warm Middle Eastern spices used like allspice, cinnamon, and seven spices.

What is kibbeh made of?

What is the national dish of Lebanon?

Kibbeh is the national dish of Lebanon, and it's served in many different ways. 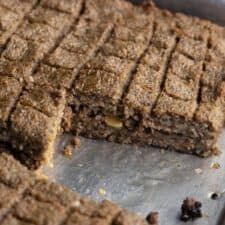