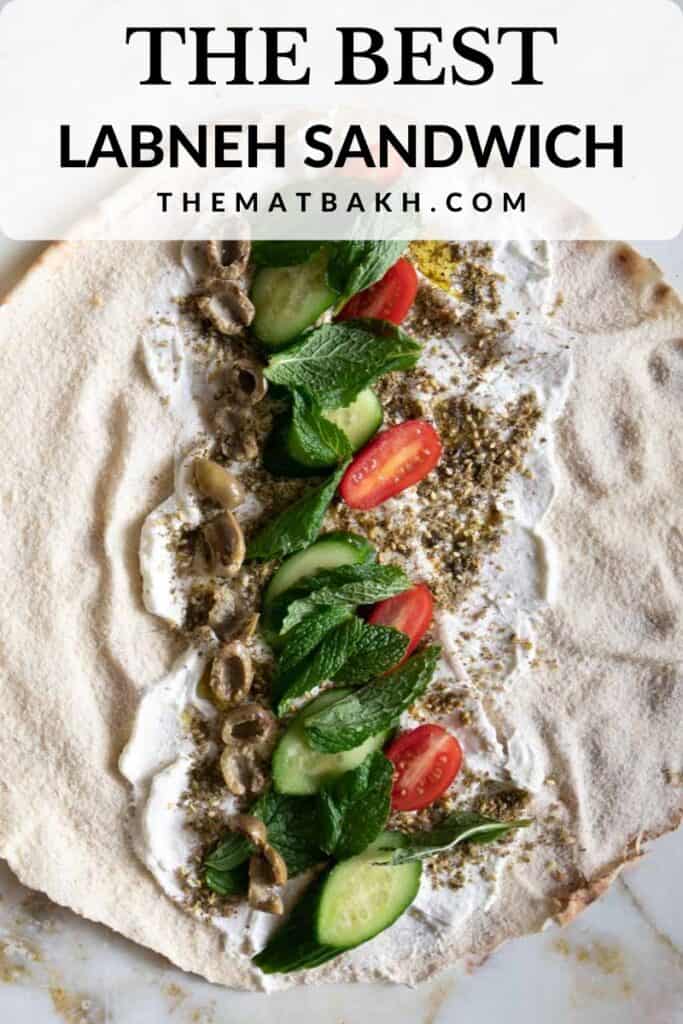 The best labneh sandwich has homemade labneh slathered on fresh Lebanese pita bread topped with za'atar, olive oil, green olives, fresh mint, sliced Persian cucumbers, and tomatoes. It's all rolled up into a pita burrito, and it's deliciously divine.

The best thing about a labneh pita sandwich is how quick and easy it is to make. It's one of my favorite recipes to pack for a lunch or take on the go. It has a lot of fresh ingredients, and it's fully customizable.

Sometimes I skip the vegetables and eat this sandwich with just plain labneh drizzled with some olive oil. I've probably eaten thousands of labneh sandwiches, and this is my all-time favorite combination of ingredients.

How To Make A Labneh Sandwich

Prepare all of the ingredients. Split the pita bread in half. Use the thicker half and set it with the rough side facing up.

Slather on a thin layer of the labneh cheese, only covering the middle portion of the bread. Sprinkle the dried za'atar spice. Add as much as you like. Drizzle some olive oil on top. Layer the fresh mint, sliced tomatoes, and sliced Persian cucumbers.

The best labneh sandwich starts with a good quality fresh Lebanese pita bread. If you can only find the small diameter/thick pita at the grocery store, this recipe works better as a pita pocket. Just split the pita in half, and stuff it with the same ingredients.

Another easy way to enjoy a labneh sandwich is with some dried mint, flaked sea salt, and a drizzle of olive oil. It's another delicious and quick variation.

Can Greek yogurt be substituted for labneh?

No. Greek yogurt and labneh taste different. Labneh is more sour in taste.

What is labneh and zaatar?

What is a labneh sandwich?

A labneh sandwich is a pita sandwich that has labneh in it.

Is labneh better than yogurt?

For a labneh sandwich or dip, yes! Yogurt contains too much liquid and will make the pita bread soggy.

In The Mood For More?

This labneh sandwich is made with Lebanese pita bread, homemade labneh, zaatar, olive oil, fresh mint, sliced cucumbers, and tomatoes. It's rolled up into a pita burrito that can be eaten on the go!