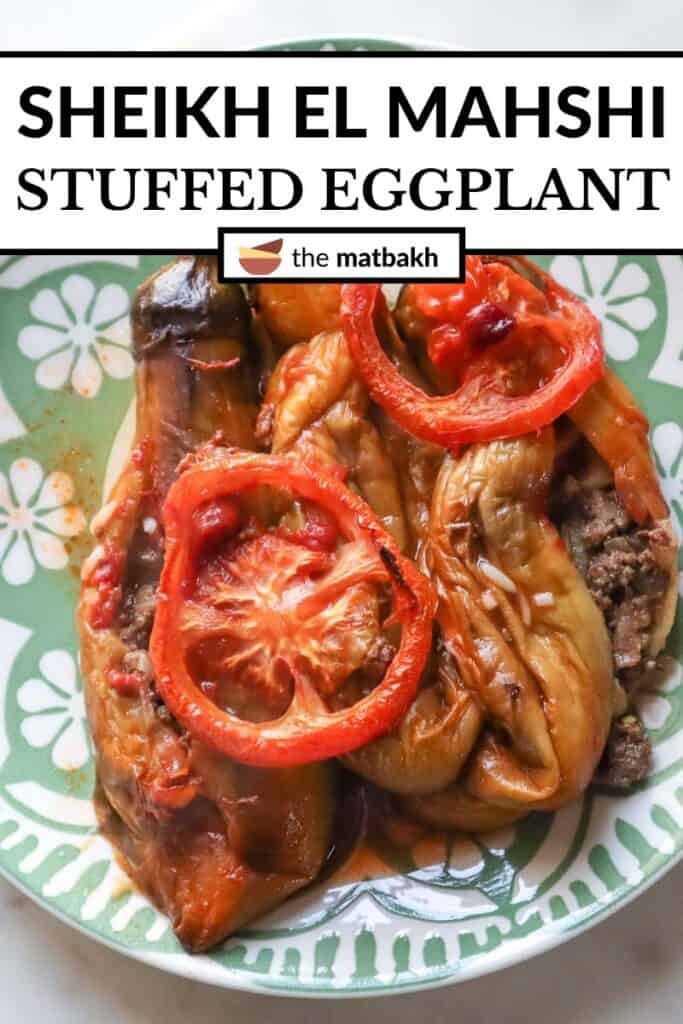 Sheikh El Mahshi, literally meaning king of mahshi, is made with spiced minced meat stuffed into roasted eggplants then oven-baked in a rich tomato sauce. This stuffed eggplant is rich in flavor, packed with nutrients, and also super easy to make.

A lot of people think this is a difficult recipe (maybe because of the name?) but it's actually quite easy. And if you like mahshi, check out this kousa mahshi recipe!

This stuffed roasted eggplant in tomato sauce is gorgeous! This is one of those dishes that looks glorious coming out of the oven with layers of red tomato rings on top of a bed of cooked eggplants. I also love that it is really easy to put together. You just need to bring a few layers together and the result? A large casserole big enough to feed the entire family.

How To Make Sheikh El Mahshi

Start by placing the eggplants in an ovenproof dish and baking them in the oven for around 10 minutes at 375 ℉ (190 ℃) (just so that they get a bit of color and are half roasted).

Prepare the minced meat stuffing on the stove. Melt the butter, add the meat in and start breaking it up using a wooden spoon. Add in the onion, spices, pine nuts, and pomegranate molasses (if using). Set aside.

Create a cut down the center of each eggplant, spread it out a bit to make space for the stuffing. Place a large spoon of the meat stuffing in each eggplant.

Once all the eggplants are stuffed, start topping them with tomato slices until they're all covered.

Then mix the tomato paste with water and pour over the casserole until all the eggplants are covered with liquid.

Put the dish in the oven and bake 350 ℉ (180 ℃) for around an hour until the tomato sauce thickens a bit and the tomato slices are fully roasted.

Stuffed eggplants should be stored in an airtight container in the fridge. They last for up to 4 days. This recipe does not freeze well.

Why the name Sheikh El Mashi?

Sheikh El Mahshi literally translates into the "Chief/king of Mahshi." It gets its name because it's stuffed with more superior ingredients (meat, pine nuts) when compared to other mahshi dishes like kousa mahshi (which is mainly stuffed with rice and some meat).

What is Sheikh El Mahshi best served with?


A side of Lebanese vermicelli rice is the perfect companion to this dish. I also sometimes serve it with a cup of yogurt on the side. 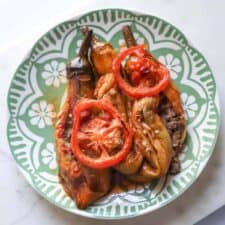