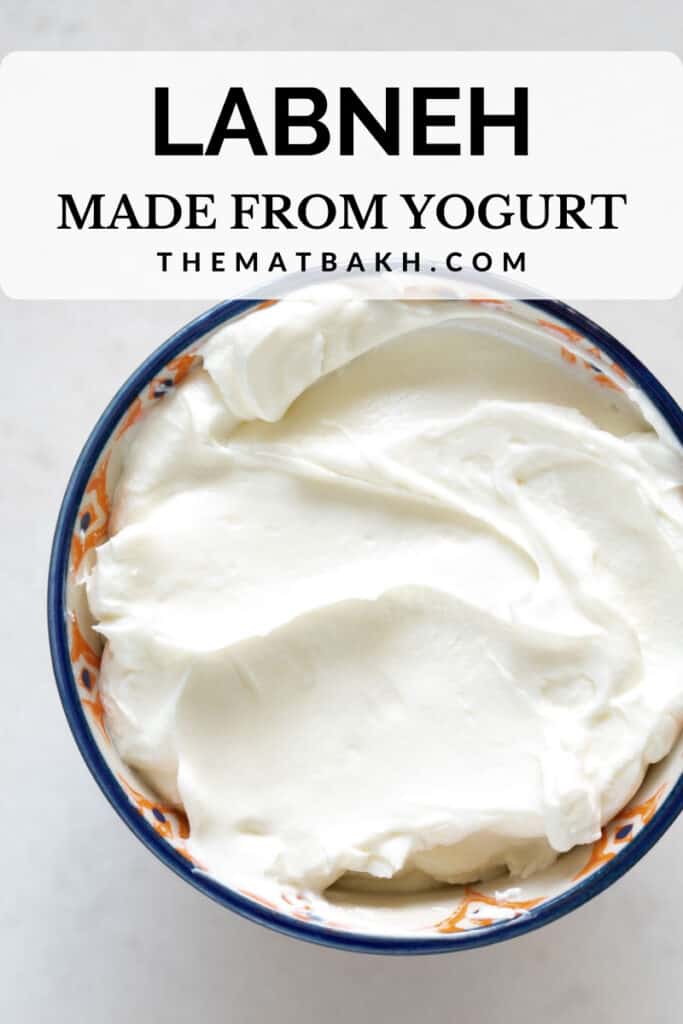 Labneh can be made in two ways: labneh using homemade yogurt (starting from milk) or using store-bought yogurt. This labneh recipe starts from store-bought yogurt and it's perfect for when you are short on time and want to simplify things.

I love how simple and easy this recipe is. It's literally one step- strain yogurt. If you are short on time and want a really simple way to make labneh, this recipe is for you. Not to mention, there are so many ways to eat labneh: sprinkle some za'atar on top, labneh on a toasted bagel, garlic labneh with pita chips, labneh pita sandwich, and even labneh frosting! Mind blown.

I recommend full-fat unsweetened plain organic yogurt like the one below. Two quarts of yogurt will yield about a quart of labneh. This is literally the only required ingredient.

How To Make Labneh With Store-Bought Yogurt

Add the strainer on top of a second bowl to catch the drippings (whey) of the yogurt while straining.

Pour the yogurt on top of the paper towels. Strain the yogurt overnight or for a minimum of 6 hours in the fridge.

Once the labneh has reached the desired consistency, remove and drain the bottom bowl of whey liquid. Pour the labneh into a container. Add some salt to taste.

Eat labneh in a variety of ways: as a dip or in a labneh sandwich, with vegetables, pita chips, or pita bread. Some sides that go well are fresh mint, sliced cucumbers, fresh tomatoes, and olives. And, don't forget the pita bread or pita chips!

If you are a garlic lover, labneh is excellent with some mashed garlic. Garlic labneh is can be made with a mortar and pestle or garlic press. Mash 1 clove of garlic with a pinch of salt for every 1 cup of labneh. Mix the mashed garlic and labneh well together.

Another way of eating labneh is with za'atar, olive oil, and salt flakes. This is my favorite way to eat labneh. You can eat za'atar labneh with fried pita chips or regular pita bread.

Store the labneh dip in an airtight container in the fridge up until the expiration date on the store-bought yogurt container. I don't recommend freezing labneh.

What yogurt is best for making labneh?

What's the difference between labneh and Greek yogurt?

Labneh made from store-bought yogurt is a simple, quick, and easy way to make not sour homemade labneh.