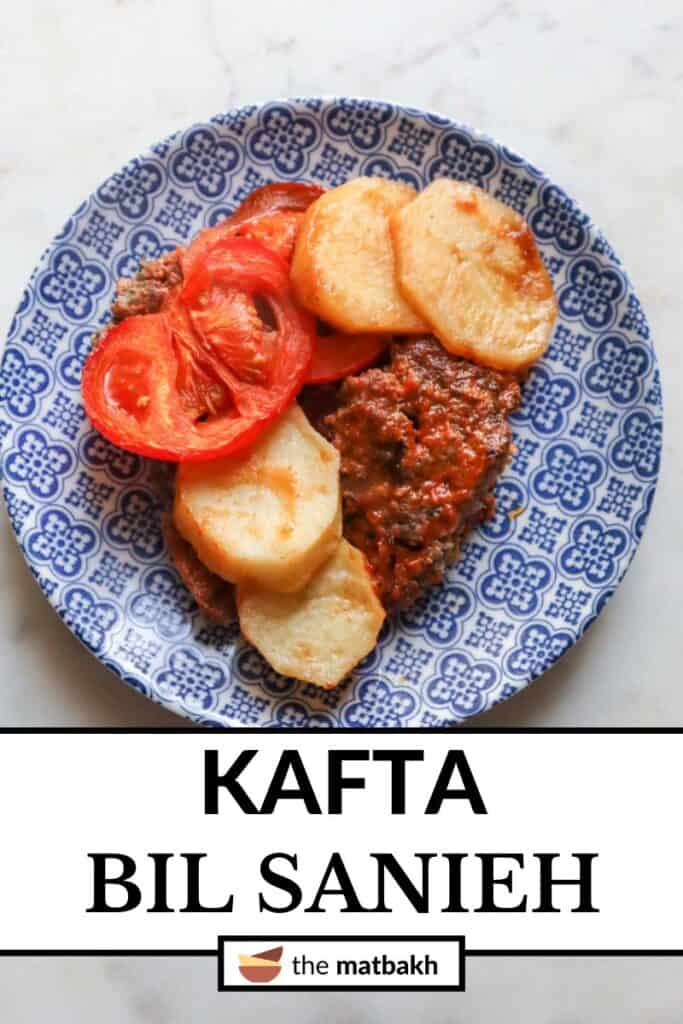 Kafta bil sanieh is oven-baked kafta with potatoes, tomatoes, and vegetables in a tomato sauce. It beats all other kafta meatball recipes (in my humble opinion). This childhood favorite is a comforting dish loved by people across Lebanon. Served alongside Lebanese vermicelli rice, it will warm your heart and soul every single time you have it. If you like kafta kabobs, try this kafta bil sanieh.

The textures and flavors of roasted vegetables are my absolute favorite thing about this recipe. They perfectly blend with the meat and side dish of rice to make for a mesmerizing culinary experience.

How To Make Kafta Bil Sanieh

Start by making the kafta mixture. Wash and chop the parsley. Mince the garlic either with a garlic press or mortar and pestle. Finely chop the onion. Place the minced meat in a deep mixing bowl. Add in the minced garlic, chopped parsley, chopped onions, ground allspice, ground seven spice, ground cinnamon, and salt. Mix them in really well.

Add in an egg and breadcrumbs and use your hand to mix everything together.

Grease a baking dish with some oil. Place the kafta mix in the middle of it and use your hand to start spreading it all across. Leave some space around the meat to place the vegetables on the outside edges.

Next, start placing the vegetables around the meat. Start with the onions, bell pepper, potatoes, and top with the sliced tomatoes.

Mix the tomato paste with water and pour it all over the dish covering the meat and the vegetables with the liquid.

Bake the kafta bil sanieh at 350 ℉ (180 ℃) for about an hour or until the meat is cooked and the vegetables are fully roasted.

Store kafta bil sanieh in the fridge in an airtight container. This recipe does not freeze well.

What is the difference between kafta stew and baked kafta?

In the kafta stew version, the vegetables are not roasted and the potato isn't usually half-cooked. Also, kafta stew is prepared on the stovetop whereas baked kafta is prepared in the oven.

What to serve with kafta bil sanieh?

Serve baked kafta and potatoes, aka kafta bil sanieh, on a bed of Lebanese vermicelli rice (that's the best answer). Some people also like to serve some hummus alongside this dish because it pairs really well with the kafta.

What is kafta made of? 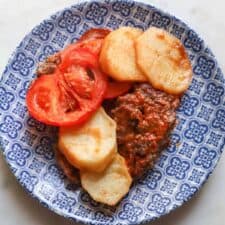