Shish barak is a famous meat dumpling recipe all over the Levant region, and for good reason. After all, what's better than fresh, homemade meat dumplings cooked in a tangy yogurt sauce? Absolutely nothing - you can trust me on this!

This recipe does involve a few steps, so it takes a little bit of time. It's a great weekend dish or holiday dish when you want to make something extra special. Don't be intimidated by the difficulty because I'll walk you through step by step how to make it. Also, there's a video at the bottom of the post.

Shish barak is one of those traditional recipes that symbolizes the ultimate comfort food. This traditional shish barak recipe is made from scratch with delicious homemade meat dumplings simmered in a dried mint yogurt stew.

There are three parts to this shish barak recipe, so the ingredients have been broken into those three parts below.

How to Make Shish Barak

Make the dumpling dough by mixing the flour, salt, sugar, and yeast together. Add the egg and vegetable oil to the dry ingredients and combine. Gradually start adding the warm water until the dough becomes non-sticky and soft. Roll the dough in a ball and place it in a large bowl. Let it rest covered for at least one hour.

While the dough rests, prepare the meat filling. In a small skillet, melt butter on medium-high heat. Add the chopped onion. Cook until the onion is fragrant and starts to change colors. Add the minced meat, breaking up the clumps with a wooden spoon until the meat is browned and cooked through. Sprinkle the filling with pine nuts if using. Set the filling aside.

Knead the dough and roll it out with a rolling pin on a floured surface.

Use a small round cookie cutter or glass to make small circles. You can also use a biscuit cutter.

Fill each circle with a teaspoon of meat filling. Don't overfill the dumplings. Use your fingers to close the dough to form a half-moon shape. Then fold both sides of the shape around your index finger and pinch them together.

Continue folding the dumplings until all of the dough and meat filling are used.

Heat up a tablespoon of butter in a wide sautee pan and half-cook the dumplings.

Strain the yogurt into a large pot.

Add the water and cornstarch to the yogurt and whisk until everything is combined really well. Turn the stove to medium heat to medium low heat, slowing bringing the yogurt to a boil (about 20 minutes). Continue stirring throughout this process. Once the yogurt starts boiling, turn the heat to low heat.

Add the partially cooked dumplings and dried mint. Continue boiling the yogurt sauce on low heat while stirring until the dumplings cook (about 10 to 15 minutes).

Yep, you read that right. Even though it's considered difficult to make, this dish can be put together so fast when you meal prep for it. Here are a few ideas:

How Long Does It Take To Make?

Shish barak takes quite a bit of time to make just because there are so many elements that need to come together before it's all done. All-in-all, it took me around 3 hours to make this dish. If you're looking to cut down the time, you can make the dough ahead of time or use frozen shish barak dumplings. Despite the fact that it requires quite the effort, this recipe is so worth it so don't be put off by the time it takes to make it.

What To Serve With This Dish

How To Lighten Up This Dish:

Instead of pan-frying the dumplings in butter, bake the shish barak dumplings in the oven at 375 ℉ (190 ℃) for 15 to 20 minutes or until golden brown.

Another option is to use lean ground meat. It's possible to substitute ground chicken breast or lean ground turkey.

Finally, measure and reduce the amount of butter and use a non-stick frying pan. Additionally, a cooking spray is an appropriate substitute when pan-frying the dumplings.

Watch How To Make It 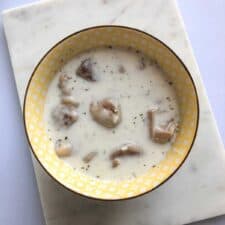 Meat Filling for the Dumplings

Simmer the Dumplings in Yogurt