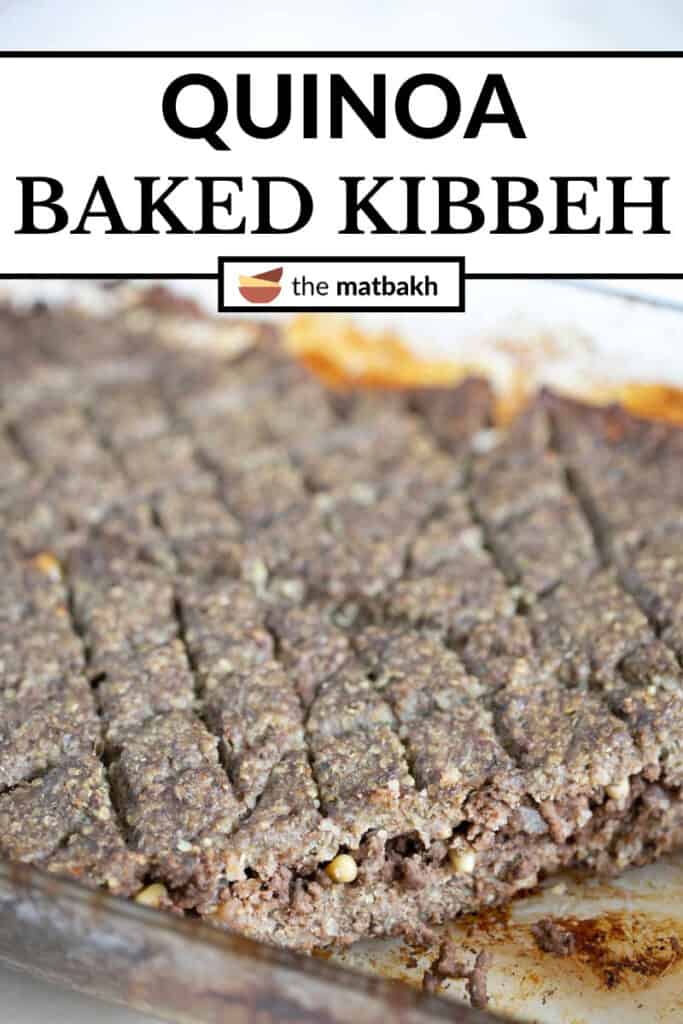 Serve this recipe with cucumber mint yogurt or plain homemade yogurt. Or, try it with a mint cabbage salad or tarator tahini sauce.

I love how this quinoa kibbeh tastes similar to traditional bulgar wheat kibbeh, but it's gluten-free! Also, I really love this version with fresh basil and fresh mint added to the meat mixture.

The middle layer stuffing is made with:

The kibbeh and quinoa meat mixture form the top and bottom layer of the stuffed quinoa kibbeh. Here are some notes on the ingredients:

How To Make Quinoa Kibbeh

This recipe is split into two parts: making the stuffing and meat mixture and assembling the kibbeh.

Prepare the dry quinoa per the package instructions. I just boil the quinoa with water for 15 minutes, then strain it. Allow the quinoa to cool.

Make the kibbeh stuffing by frying the chopped onions in butter or oil. Add the minced meat breaking up the clumps. Once the meat has browned, add the spices. Turn off the stove and add the pomegranate molasses.

Blend the food processor on high until the meat is fully blended. Scoop the seasoned meat mixture into a bowl.

Add the cooled quinoa, a couple of ice cubes, and the remaining meat to the food processor. The ice keeps the meat mixture cool when it blends.

Blend the quinoa and meat.

Dip your hands into ice water and spread half of the meat mixture into a greased 9" x 13" baking dish (or equivalent).

Tip: The quinoa meat mixture is a little stickier than bulgar wheat kibbeh. This is normal.

Spread the meat and pinenut stuffing into an even layer.

Cut the horizontal and vertical lines fully to the bottom. The other lines are shallow cuts to form a design.

The kibbeh will shrink a bit once it cooks. Serve with cucumber yogurt, tarator sauce, or mint cabbage salad.

Kibbeh is freezer-friendly; just assemble the dish without baking it. Store it in the freezer covered for up to 4 months. When ready to bake, thaw prior to baking. Store baked kibbeh in the fridge for up to 4 days. Kibbeh reheats well in the microwave.

What can I substitute for bulgar wheat in kibbeh?

Cooked quinoa is an excellent substitute for bulgar wheat.

Can I use quinoa instead of bulgar? 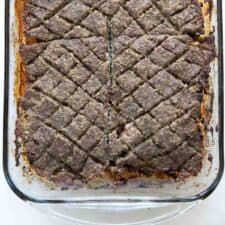