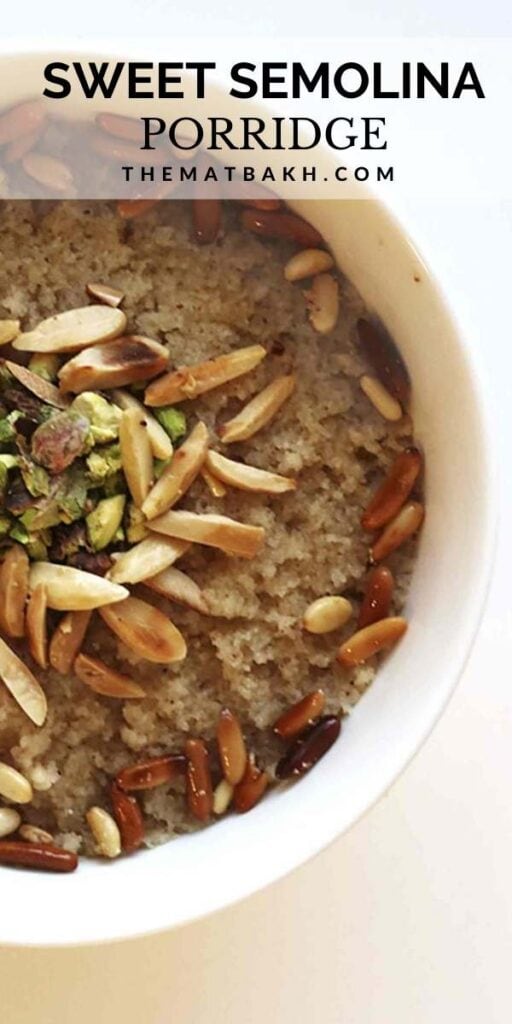 Mamouniyeh is a traditional Syrian semolina pudding that is mostly served on special occasions like weddings and birthdays but is also a very popular breakfast porridge. Made of roasted semolina, garnished with nuts, cheese, or fresh cream and served warm, mamouniyeh makes the perfect comfort breakfast or sweet dessert. I know you're thinking cheese and pudding don't sound too great but trust me, it perfectly balances out the sweetness of the pudding and makes it an amazing start for the day.

As a kid, this semolina pudding was one of my favorite dishes EVER, and it was something my family would have every Friday morning as a lazy comfort breakfast, so it gives off a nostalgic feeling. It's one of my absolute favorites because it brings back great memories. You'll be surprised at how quick and easy it is to make!

How To Make Syrian Semolina Pudding

Melt 1 tablespoon of ghee/butter in a pan and toast the nuts until golden brown. Set aside for later use (for the topping).

In a medium-sized pot, add the sugar, water, and orange blossom water and dissolve the sugar in medium-high heat. Once the sugar dissolves and starts bubbling, immediately lower the heat. Let it sit while you toast the semolina.

In the same pan, you used to toast the nuts, melt the remaining ¼ cup of ghee or butter. Once it's melted, add the semolina and stir continuously until golden brown. It should take on a caramel color.

Once your semolina takes on a nice color, add it to the pot where your sugar-water mixture is sitting and turn the heat back up to medium-high. You'll want to stir constantly as to not get any lumps. This should take around 7-8 minutes.

As soon as your pudding thickens, pour immediately into a big bowl or into smaller individual bowls. Garnish with nuts, cream, or cheese.

How to Decorate Semolina Pudding

Mamouniyeh is usually served in a big bowl, but I've seen it getting popular being served in smaller personal bowls. Play around with how you sprinkle your toppings. You can create fun designs by making shapes on the pudding with the nuts. I like to put the pistachios in the middle, then sliced almonds and the pine nuts on the edges.

Mamouniyeh is best eaten fresh, however, it can be stored in the fridge for up to 2 days and reheated in the microwave.

Made from a hard type of wheat called durum wheat, semolina is basically just a coarser flour. It's usually used in pasta, bread, as well as baked goods, but it's super well known for being used in semolina porridge. This is because it absorbs liquid really well.

What are some Syrian desserts that use semolina?

In Syria, Semolina is very commonly used in numerous desserts and baked goods like ma'amoul bars and harisse and gives them their signature crumbly texture. Additionally, it's commonly served in savory dishes as couscous in the place of rice.

What is the perfect texture for mamouniyeh?

Mamouniyeh has a smooth, heavy, and velvety texture. As it cools, it will usually take the shape of whatever you put it in. Some people prefer it more liquid, but I like it to be more thick and creamy.

For the Topping (Your Choice Of):

More Delicious Desserts For Everyone