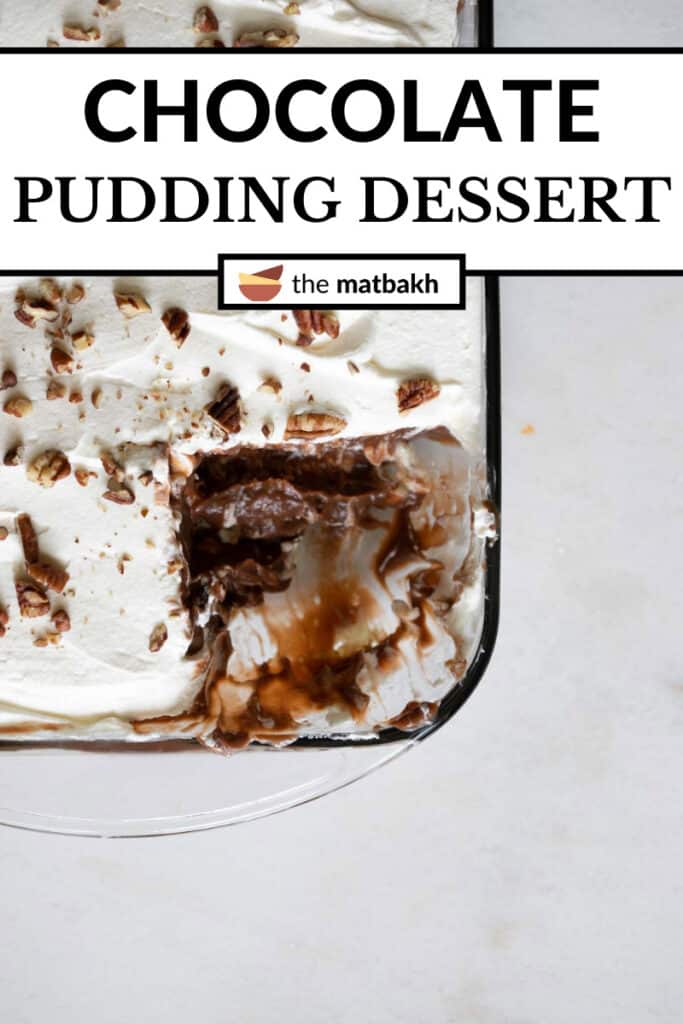 Any friend, family member, or enemy that has tried this dessert has gone back for seconds. It seems like a relatively simple chocolate pudding dessert, but it's much more than that. It's the layers of creamy goodness that add depth of flavor to this chocolate delight yummy.

This layered chocolate pudding dessert is AMAZING. It's hard not to eat the whole thing in one sitting. I like to get a little bit of each layer in every single bite. The combination of the layers is what makes this recipe so good.

Chocolate pudding layer: pudding mixture and 2% milk (or full fat). I prefer to use instant pudding mixes. Get the large pudding mix size.

How To Make A Four Layer Chocolate Delight

This chocolate delight yummy dessert is very easy to make, however, it has a few layers. Make the butter pecan crust first, and while it's cooling, prepare the other 3 layers: chocolate pudding, sweetened cream cheese, and whipped cream. Once the layers are all made, assemble the chocolate delight yummy. I've broken the steps down below in the sequence I recommend making this recipe.

Remove the baking pecan crust from the oven and allow it to cool completely while preparing the other layers.

In a large bowl add the vanilla and chocolate pudding packet. Measure out 4.5 cups of milk. Using a whisk, mix until the pudding thickens up (about 5 minutes). Set it aside.

Hint: The pudding package will call for 6 cups total, however, this pudding dessert needs less milk in order to form a more robust middle section.

In a second large bowl, add the 8 oz. package of cream cheese, ½ cup of confectioner's sugar, ½ cup of heavy whipping cream, and 1 teaspoon of vanilla extract. Using a hand mixer, whip the ingredients together. Set the cream cheese

Hint: Stop whipping the cream cheese once it has a cake frosting-like texture.

In a third large bowl, add the remaining quart of heavy whipping cream, ½ cup of confectioner's sugar, and 1 teaspoon of vanilla extract. Using a hand mixer, whip the whipping cream until peaks form. Set the homemade whipping cream aside.

Add some chopped pecans on top. Put the chocolate delight yummy dessert in the fridge for 1 hour to set prior to serving.

This chocolate pudding dessert can be made ahead by 2 days. Store in the fridge with a plastic wrap cover for up to 5 days. I do not recommend heating this dish nor storing it in a freezer.

How much does a box of pudding make?

What liquid is whipped cream made of?

Whipped cream is made of heavy whipping cream, confectioner's sugar, and vanilla extract.

Make The Other Layers