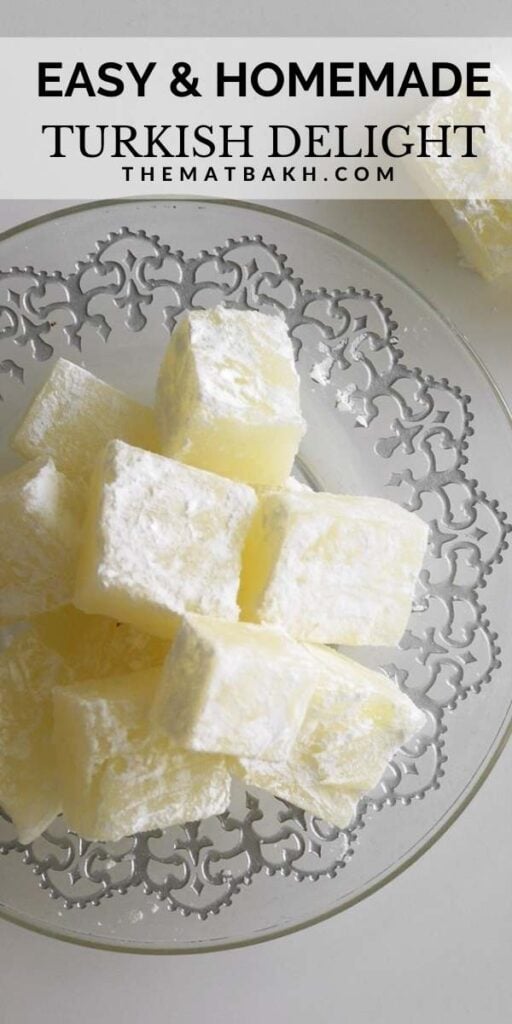 This recipe for Syrian Turkish delight, or Raha, makes chewy little squares of deliciousness that are usually served with Turkish coffee. They're sticky, sweet, and highly addictive. As a kid, I used to have them sandwiched in between tea biscuits. I can't even describe how the gooey texture of the Turkish delight mixed with the buttery, flaky texture of the biscuits feel. The way they smell and taste is indescribable and just instantly transport me to simpler times. And guess what, even though you'd usually buy them at a local candy or dessert shop, they're actually super simple to make at home, and are delicious with tea or coffee. But, he only downside to making them at home is that once you start eating, you won't be able to stop!!

One thing I love about this recipe is that it's the basic, plain version of Syrian Turkish delight. I've tried so many different versions, but there's nothing like the sticky, chewy, plain Turkish delight. The plain version of Raha is probably the most common and has always been my favorite, but you can always get creative and add pistachios, walnuts, dried fruit, dates, food coloring, it's really up to you!! My personal favorite add-on would probably be chopped dates.

Traditionally, and in this recipe, you'd make Syrian Turkish delight with cornstarch. I've seen recipes that use gelatin, cream of tartar, and xanthan gum, but I personally find cornstarch the easiest to work with. And you'll also have no trouble finding it at any grocery store. After moving to Egypt a couple of years ago I've learned to make-do with what's available here, and I find that sticking to simple ingredients is always the best option.

You'll need a deeper dish or baking tray. Since you'll be lining it with baking paper before pouring in your Turkish delight mixture anyways, the material of the tray itself won't really matter. For this recipe, use a smaller tray. I used a 7" x 11" pyrex dish (it has a 5" x 8" base). It was the perfect size and made around 35 squares.

You will also need:

You should definitely store them in the fridge, and in a metal or glass container. Plastic containers have the tendency to make sugar "sweat". Since this recipe is free of gelatin and xanthan gum, the Turkish delight might eventually start to get wet. If this happens, just dust with more cornstarch before serving. Compared to store-bought raha, the homemade version does have a more fragile texture so you'll need to serve it cold instead of letting it sit out at room temperature.

Syrian recipe for Turkish delight, or Raha, are chewy, sweet, and aromatic cubes of goodness that pair perfectly with tea or Turkish coffee.