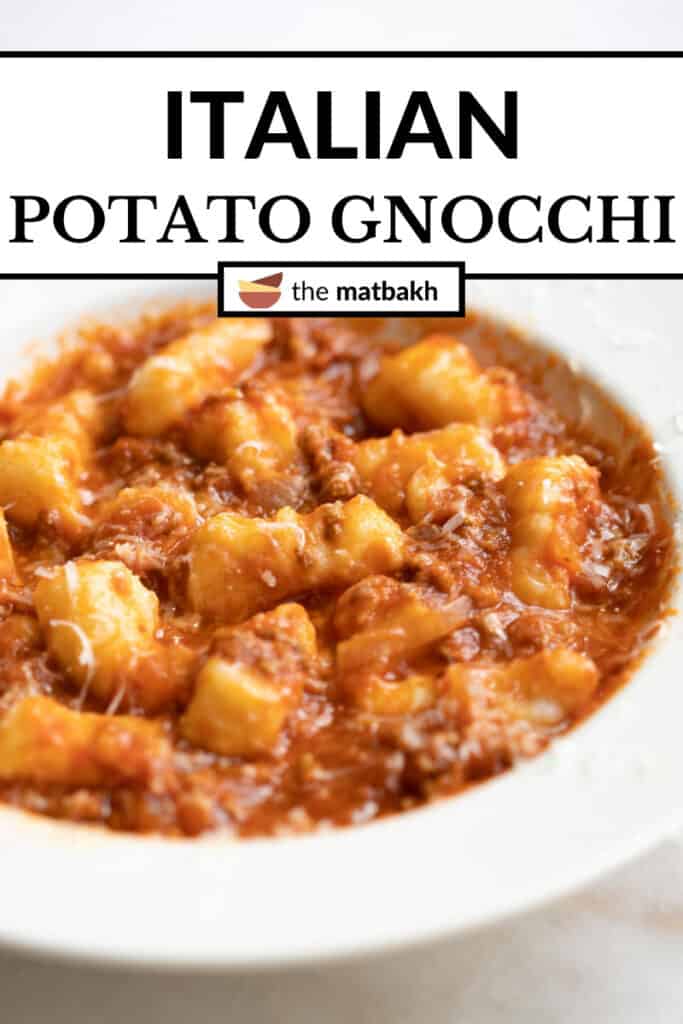 Italian potato gnocchi is a simple homemade pasta dumpling recipe made with russet potatoes, flour, egg, and salt. This easy gnocchi recipe is pillowy, tender, and perfect with a slow-simmered meat ragu sauce.

Originating in Northern Italy, gnocchi is an Italian potato dumpling that has been around since Roman times.

This homemade potato gnocchi is an authentic Italian recipe. If this is your first time making homemade pasta, this is a great recipe to start with. Homemade gnocchi is tender, delicious, and better than store-bought gnocchi.

How To Make Homemade Potato Gnocchi

Peel and quarter the potatoes. Boil potatoes in a large pot of water until soft. Drain potatoes.

Place the potatoes on a clean work surface.

Using a potato ricer or potato masher, crush the potatoes.

There should not be any potato chunks.

Add the flour and form a well. Crack a whole egg into the well.

Mix the egg. Add in flour, continuing to mix. Add a pinch of salt to the dough.

Knead the flour, potatoes, salt, and egg together. Don't knead too long. The dough should feel soft but not too sticky. Resist the urge to add more flour!

Add a little flour to the work surface. Cut the gnocchi dough into sections. Roll out one of the sections with your hands to form a long rope.

Dust the fork with flour. Set the fork at an angle. Roll a piece of dough down the fork. Press firm enough to form ridges on the outside of the gnocchi.

Continue until all gnocchi pieces have ridges. Set the uncooked gnocchi aside in a single layer on a lightly floured surface.

Bring salted water to a rolling boil. Drop the gnocchi into the boiling water using a bench scraper (or flat plate). Once the gnocchi pop to the top of the water, wait about 15 seconds. Use a slotted spoon to remove them. The total cooking time is one to two minutes typically.

Place the homemade potato gnocchi directly into a simple tomato sauce. Grate some Parmigiano Reggiano over the top. Buon appetito!

The only potatoes that can substitute russet potatoes are dry, floury potatoes.

Uncooked gnocchi freezes well. Just add the floured gnocchi to an airtight container. When ready to use, drop them frozen into the boiling water. This traditional gnocchi recipe does not store well in the fridge.

Is gnocchi pasta or potato?

Gnocchi is a potato pasta dumpling made with mashed potatoes, flour, egg, and a pinch of salt.

Is there a difference between gnocchi and potato gnocchi?

Gnocchi is potato gnocchi, which is a bite-sized potato dumpling.

What do you eat gnocchi with? 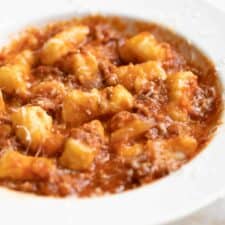