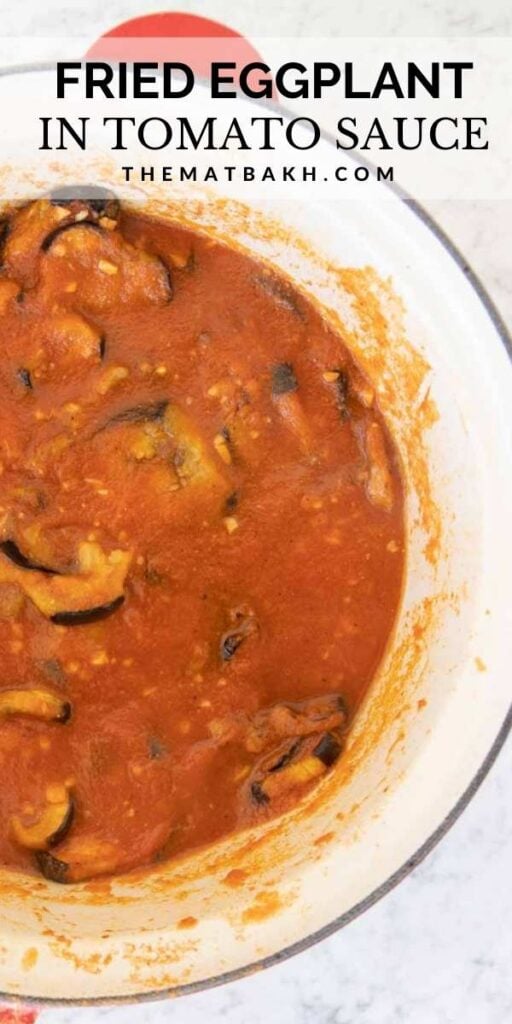 Mesa'ah is Egyptian fried eggplant in a garlic spicy tomato sauce, and it's a very common dish in Egypt. It's eaten with fresh pita bread, and it's absolutely delicious. This recipe uses simple ingredients and comes together in about 30 minutes.

You will also need:

What is the Healthiest Way to Cook Eggplant?

You can steam eggplant or roast eggplant without oil. My American grandfather always said, "No fat, no taste" when we were grocery shopping as he added Little Debbie snacks to the grocery cart. My opinion is, let's use fat but in a smart way.

So I pan fry this eggplant with a little bit of EVOO (Extra virgin olive oil). I like cooking it this way because I can control how much oil is being used for the dish. If you don't measure out the oil, you will be surprised at how much oil actually gets soaked into the eggplant.

You want just enough olive oil to help cook and flavor the eggplant, but not too much where you are biting into a greasy eggplant. That's why it's important to use a nonstick frying pan for this recipe.

Can You Eat The Skin Of Purple Eggplant?

Yes! The outer skin of purple eggplant can be eaten, although it may have a chewy and tough texture.

Want Another Recipe for Fried Eggplant?

When my husband makes mesa'ah, he usually makes this fried eggplant dish with garlic as well. Basically, you are killing two birds with one stone by frying a little bit extra eggplant.

To make this garlic fried eggplant, just mash 4 garlic cloves with ½ tsp of cumin and 1 tsp of salt. Mash 1 tbsp of fresh green pepper (it can be spicy pepper or bell pepper) into the mashed garlic paste. And spread the garlicky love over the fried eggplant pieces.

We like to eat this fried eggplant with our baked falafel sandwiches. Another way to this eggplant is just with some fresh pita bread.

Mesa'ah is Egyptian fried eggplant with a homemade tomato garlic sauce. This recipe is vegan, delicious, and quick to make.

Back To School Treats