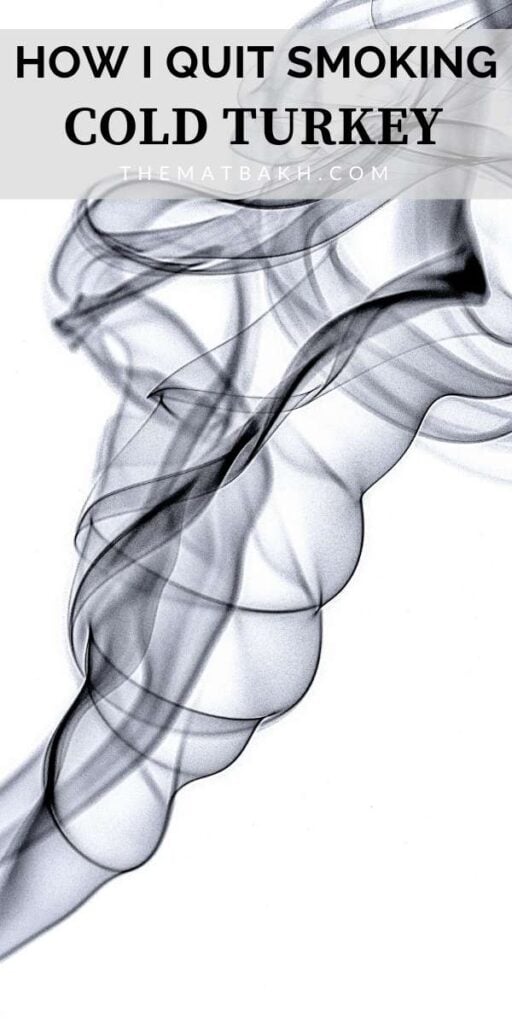 If you haven't known me for long, you might be surprised that I used to smoke cigarettes. I started smoking back in college at the age of 19 and continued to smoke until I quit on August 31st, 2014 at the age of 29. I smoked for 10 years mostly on and off, getting up to a pack a day towards the end.

I quit smoking two times successfully. Once by hypnosis and a second cold turkey. I'm going to share everything I learned about trying to quit smoking, finally quitting, and how I've managed not to go back to smoking.

First off, I need to say that this is not medical advice. I'm not a doctor, and this is just my personal experience and opinion.

Second off, if you are a smoker and want to quit, this post is for you! I struggled so many times to quit, and I feel so much better not smoking. The quality of my life has increased dramatically, so the effort to quit is really worth the reward.

This post doesn't really fit my overall niche of a Mediterranean food blog, however, it's something I feel can benefit others if shared.

How I Started Smoking In The First Place

When I was in college, several of my friends would smoke at social gatherings. I thought why not try it? I thought I looked cooler and it gave me something to do when I experienced social anxiety. Smoking eventually transitioned into becoming my evening ritual, where I'd use it to ponder and reflect on life. I'd go sit outside by the river and smoke a couple of cigarettes before getting ready to go to bed.

I started to use smoking to cope with stress. I'd jump up to smoking half a pack of cigarettes during finals. I thought it was helping me manage my stress, but in hindsight, I think I was just using it as a procrastinating tool. I'd go out for a smoke to procrastinate from studying.

Being In Denial That I'm A Smoker

I never thought I was a smoker until about 4 years in. Funny how that happens. I always thought I could quit whenever I wanted to and that I wasn't addicted. So I decided to stop smoking during the work week. That didn't go well. That's when I realized that I was really hooked.

I would go a day without smoking, then cave the next day. This would go on for a couple of years. I probably tried to quit a hundred times. I wasn't breathing very well, and I would get respiratory illnesses often. I suspected it was due to the smoking, but I wasn't 100% sure.

I tried the patches which ended up making me dizzy. I tried the gum which would hurt my throat. I tried the vape which would give me a headache. I would smoke the vape more than cigarettes just because I could smoke it inside. Nothing was working. I needed to quit smoking, this was starting to affect my life.

My Timeline For Quitting

My personal journey for quitting smoking was a very long one. Everyone has their own journey, so yours may or may not be like mine. All I can say is there is no cookie-cutter way of doing things. You have to find what works for you. Here's my timeline for quitting smoking.

How I Quit Smoking With Hypnosis

After a couple of years of trying to quit on my own, I decided to seek some professional help. I read about how to quit smoking in forums and read article after article online. I stumbled upon hypnosis as a means for quitting smoking, and I decided to try it. I went to 3 sessions of hypnosis, and in my personal experience, it worked. I stopped smoking for 1 year and 4 months.

I think I could have permanently quit smoking if I had known one really critical piece of information. Never pick up another cigarette. Ever.

Someone offered me a cigarette at a social gathering. I thought to myself, I'm not addicted anymore. I can just have one. Well, one turned into two, and this led to a complete relapse that lasted about 2.5 years. During this relapse, I smoked even more than I had before quitting. I was up to one pack a day. My voice was hoarse. I was always sick. I couldn't breathe very well. I was generally not doing very well.

How I Quit Smoking Cold Turkey

I was living with my parents after working in China. My father was really concerned about how much I smoked. He didn't know how to help, so he would tell me I'm throwing away my life, shake his head, and walk away. I was so defensive because deep down I wanted to quit but couldn't figure out how to do it. I felt like a failure.

I don't know what side of the bed I woke up on that day. But it was August 31st and we were going into a new month. I thought new month, new you. I looked myself in the mirror and tried to imagine what my life would be like as a smoker. It wasn't the life I wanted.

And then I just quit cold turkey. Out of nowhere. I just said "I'm going to worry about today". I'm not going to smoke today. I'll deal with tomorrow tomorrow. Then the next day came. I said to myself, "wow, you already went one day, you can do two days." Then the third day came, and I couldn't believe it. I had gone 3 days without smoking.

How I Felt 3 Days After I Quit

Physically, I wasn't feeling so good during the first 3 days. I binge ate a ton of food to help with the cravings. I just remember feeling really foggy. My mind was having a hard time computing basic things. I guess that's what a zombie feels like.

After 1 week, my energy levels picked up. I started to gain momentum, and I felt like I was succeeding. Before I realized it, I had quit for one month.

One Month After I Quit

I remember waking up that morning. I took my first deep breath in years. I had forgotten what it felt like. I had been shallow breathing all while I was smoking, especially the last few years because I was smoking a pack a day. My energy levels were through the roof. I felt like I could run, swim, squat, and dance without getting out of breath.

I remember the first real tempting moment one month after quitting. I was interviewing for a job, and the interviewer asked after a couple of hours into the interview if I smoked. He wanted to take a smoke break and was wondering if I wanted to join. I remember blurting out, sure let's go.

As we were walking to the smoking area, I started to panic. I had just quit! He offered me a cigarette, and I politely just said "You know, I really just quit." Thank you Mr. Interviewer for making me feel so comfortable after that debauchery of 3 minutes. Looking back, if he had kept insisting, I might have had one.

During the early days and weeks of quitting, I think it's really important not to be around people or environments that trigger you to smoke. I had smoker friends that I had to avoid socializing with for the first month because they were a trigger. Not that they were very pushy or anything, but that I would want to join in on what they were doing.

Quitting smoking is one of the best decisions of my life. I wish I had never smoked in the first place, but hindsight is 20/20. The quality of my life is so much better than it was as a smoker. I can workout or walk without any issues breathing. I rarely get sick. I don't use smoking as a social crutch, procrastination tool, or anxiety manager.

I didn't have to worry about not smoking during my pregnancy or while I was nursing. I saved myself $150 a month over 6 years resulting in $10,800 roughly in cigarette costs.

My Plan For Never Smoking Again

I didn't realize it at the time I quit, but I had a plan. Once I completed one month of smoking, I told myself I will never ever have another cigarette again. I had learned that lesson from my relapse.

I have been able to manage my triggers in a way where they don't trigger me anymore. If I have a difficult emotion, I don't think about smoking (like I used to). If I'm in a social setting and everyone is smoking, it doesn't even cross my mind to have one. In the beginning it was much harder, but now it's a breeze. Things get easier over time.

In conclusion, I can't ever have another cigarette, and that's ok. My quality of life supersedes any desire to start smoking again. If you want to stop smoking, don't give up. If I hadn't kept trying, I would have never quit. Sometimes you just wake up on the right side of the bed and the galaxies align in just the way you need them to.

Check Out Some Soul Nourishment Posts